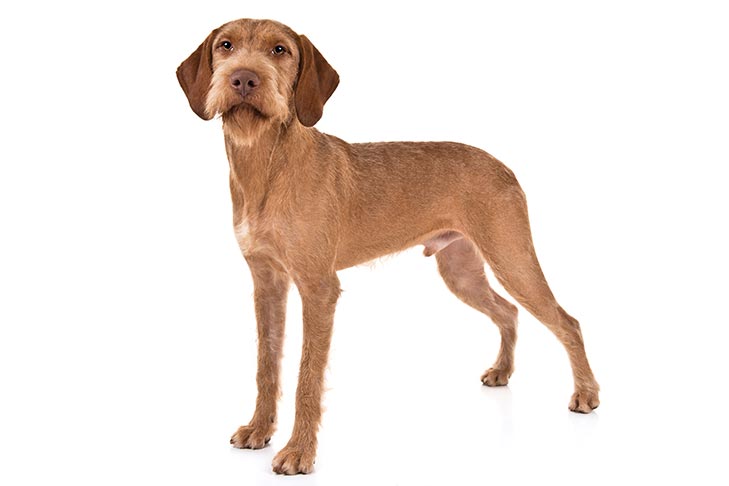 The Wirehaired Vizsla is a bit taller and heavier than Vizsla; they stand 21.5 to 25 inches tall at the shoulder and weigh 45 to 65 pounds. Just like Vizsla, the Wirehaired Vizsla originated from Hungary. The breed was created by Hungarian hunters and falconers who needed a sturdier breed with a denser coat and the same versatility and drive as Vizsla. Unsurprisingly, the breed was created by crossing Vizslas with German wirehaired pointers.

WVs are wonderful energetic dogs that are equally useful. It is important to take out Wirehaired Vizslas pet insurance as soon as you purchase or adopt your dog. With the right pet insurance, you will cover medical expenses for your pet including the cost of hospitalization, illness, surgery, diagnostic tests, emergency care, accidents and so on.

To get a quote for Wirehaired Vizslas pet insurance, click here.

Even though Wirehaired Vizslas are not really a sickly breed, some dogs are prone to certain ailments and genetic illnesses. The breed may suffer from conditions from hip dysplasia to eye diseases.

Medical conditions like hip dysplasia could cost up to $5,000 in veterinary treatment and care. You don’t want to spend such a huge amount of money out of pocket, especially in an emergency, do you? This is why you need to take out Wirehaired Vizslas pet insurance as soon as possible.

Most pet owners, without adequate pet insurance, had to make the hard choice of putting down their beloved pet due to an accident nor a really serious illness. Rather than taking such a risk, you could take out budget-friendly Wirehaired Vizslas pet insurance that would guarantee that your pet is protected always.

A three-year-old Hungarian Wirehaired Vizsla, Szinva, and his trainer and owner Tanya Gates from Yukon made history in 2016 as the dog won the trophy in 2016 North American Versatile Hunting Dog Association (NAVHDA).

The exercise tests the dog’s ability to assist during a hunt. They are considered the most difficult exercise the association could offer. Interestingly, Szinva, scaled through and clinched the title.

By winning the distinguished title, Szinva became the first dog to earn the distinction from NAVHDA. Szinva has already earned titles nationally and internationally. Since Gates got the dog when he was just 8-weeks-old, her goal has been to complete the NAVHDA Invitational Test.

The dogs were required to complete a series of tests. In one of the tests, dead birds are shot out in what looks like a hunt. Two birds are sent into the water in different locations and the dog is expected to remember the location of the drawn duck and compose himself when the second duck is shot.

The dog was asked to retrieve and deliver the ducks to his owner in reverse order. Szinva performed excellently in the test and other tests and topped about 100 other dogs in the show.

Gates said she was overcome with joy when her dog was announced the winner. “… it is announced that my dog is a Versatile Champion. This is when I think it’s a good thing I am sitting down because I would have fainted otherwise. I am overcome by a rush of feelings – shock, bliss, and relief – we did it as a team!”, she said.

Are Wirehaired Vizslas protective and aggressive?

Wireless Vizslas are protective of their families but they are not dominant dogs. The dog can also be aggressive and destructive but also they are gentle, highly intelligent and good-natured.

In the event of a health condition, your pet insurance provider will expect you to wait for some days before processing your claim. The waiting period is stated in the pet insurance policy document and it is usually 14 days for illness and 48 hours for accidents.

What medical conditions are common with Wirehaired Vizslas?