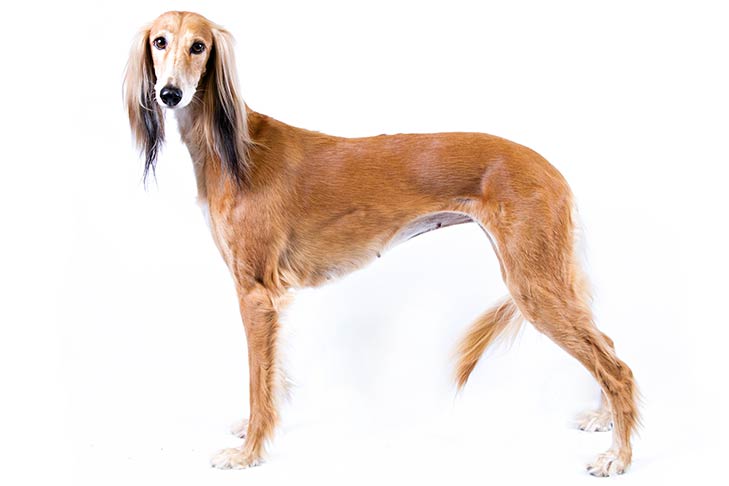 Salukis was developed in the Fertile Crescent, the region that represents the present-day Israel, Iraq, Egypt, Palestine, Lebanon, and Syria. It is believed that Salukis, together with some other ancient dog breeds, descended from the first dogs. Dogs resembling Salukis appear in Egyptian tombs that date back over 2000 B.C. Also, carvings from the Sumerian empire, around 7,000 to 6,000 B.C show dogs resembling the Saluki.

Without mincing words, Salukis are wonderful dogs and valuable treasures. You need to take out appropriate Salukis pet insurance as soon as you purchase your dog to cover pet-related medical expenses. When taking out Salukis pet insurance, it is important to research the coverage and the insurer to get the best coverage available for your pet.

It is important to keep an eye on the limits, restrictions, stipulations, exclusions and waiting period of the pet insurance policies. Some pet insurers limit coverage for older pets and also pets with pre-existing conditions. This is why you need to take out coverage early before your pet is diagnosed with pre-existing conditions in order to access comprehensive Salukis pet insurance.

To get a quote for Salukis pet insurance, click here.

Why Salukis Pet Insurance Is Important

Irrespective of their size, Salukis are less prone to hip dysplasia when compared to other breeds of similar sizes. However, certain health problems are common with the breed. Cancer is the most common cause of death; it is responsible for 35.6% of deaths among Salukis. The most common forms of cancer in Salukis are lymphoma and liver cancer.

With the rising cost of veterinary care and treatment, you could expect to spend at least $3,000 in treating your pets. For most serious medical conditions, especially those requiring more than one surgery, you might even spend more.

The good news is that you can take out Salukis pet insurance to cover pet-related medical expenses. The pet insurance will cover some certain percentage of your vet treatment, in some cases 90% with 10% co-insurance. This could come handy in covering huge vet bills.

Salukis are recognized by the Guinness Book of World Records as the World’s oldest dog breed. Sir Terence Clark, the former British ambassador to Jordan, Oman, Baghdad, and Bahrain around the 1960s and 1980s, says that the first thing the western world gets wrong about the dog is its name.

Most of the British travelers to the Middle East in the late 19th and early 20th centuries who brought Salukis to the western world didn’t know Arabic. As a result, they wrote down what they thought they heard the Arabs say, and that’s where the word “Saluki” came in.

The correct word should be “Saluqi”. Also, the west is accustomed to judging a breed by written standards, even in dog shows, but Arabs do not have written standards. Some writers in the medieval period described the Saluki but not in the form of the west’s formal standard.

Arabs believe that the Saluki is a hunting hound of the desert used for hunting gazelle, hare and sometimes wolves, foxes, and jerboas.

Terence says he has owned around a dozen Salukis with a litter of seven born in his London home. Terence first encountered a Saluki in 1973 in Oman, the dog was imported from Jordan. In his nearly two decades in the region, including three years in the UAE, Salukis were either hidden in private compounds or kept in the desert.

He says that the breed was very much a treasured object 30 or 40 years ago. “You rarely saw one in the open unless you knew where to look”, he says. “I did a lot of traveling in my early years in the Middle East but never saw one, but I knew about them in Arabic poetry”, he added.

The Saluki can become attached to one person and so they could suffer from severe separation anxiety when left alone for long.

Salukis are never aggressive but they can be aloof towards strangers and even members of their family. They are quiet at home, gentle with children and do well with other dogs.

Every pet insurance company in Canada has a waiting period. This is the number of days you have to wait to process your claim. It may differ from one insurer to the other but most have a waiting period of 14 days for illness and 48 hours for accidents.

What medical conditions are common with Salukis?