These dogs are outdoorsy and athletic. They are confident, bold, and affectionate with those they love.
Compare. Get the best policy. Save money!
Get a Quote Now 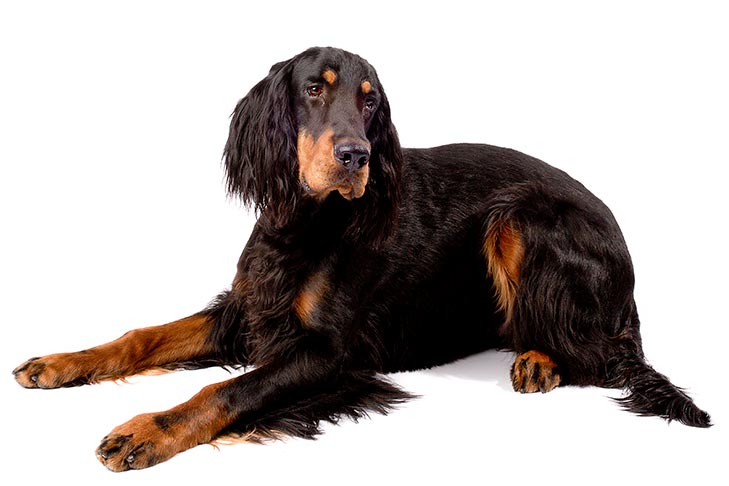 Standing up to 27 inches at the shoulder and weighing up to 80 pounds, the Gordon Setter is the largest and most substantial of the setters. The breed was developed for Scottish aristocrats. He is bold, athletic, lively and confident. The high energy dogs are great hunting companions. They compete in field trials as well as sports involving agility, obedience, and confrontation.

The development of Gordon Setters can be credited to Alexander Gordon, the Fourth Duke of Gordon. Gordon established a kennel of “Black and Tan Setters” at Gordon Castle. The early Gordon Setters looked like the English Setters but they were later crossed with Bloodhounds, flat-coated black and tan collie, solid-black setters, and black Pointers to create the breed we know today.

These black and tan dogs require care and attention like most dogs. The best way to take care of your dog is by taking out the right dog insurance. With Gordon Setters pet insurance, you will get the assistance you need to pay for dog-related medical expenses including the cost of hospitalization, diagnostic tests, emergency care, illness, accidents, injuries, and so on.

Pet owners are advised to research the policy and the insurer before taking out coverage. By understudying the coverage, you will determine if it is the best option for you. You will also find out the limits, exclusions, waiting period and stipulation of the coverage.

To get a quote for Gordon Setters pet insurance, click here.

The rising cost of veterinary care and treatment is worrisome. Some pet owners in Canada cannot afford the hefty vet bills that come with some conditions. The cost of treatment, care, and rehabilitation for serious injuries requiring multiple surgeries may sometimes shoot over $10,000.

You definitely don’t want to spend such an amount of money out of pocket, do you? Why not take out Gordon Setters pet insurance. With the right pet insurance, you will get assistance to pay for pet-related medical expenses and you will feel less strain as a result of an unexpected medical condition.

A 4-year-old Gordon Setter, Maddie, from Midcoast Maine, won Best in Breed at the 143rd Westminster Show that held on February 11 and 12.

Since the mid-1970s, the dog’s owner Nikki Maounis, director of the Camden Public Library, has been showing dogs. She has owned and bred Gordon Setters for breeds nine generations.

Gordon Setters was introduced to the United States by Daniel Webster but they were started by the Duke of Gordon in Scotland.

Maounis has attended several Westminster shows. However, she entered a dog in for the first time in 2016, Maddie’s mother Sally, who won 2016 Best in Breed title for Gordon Setter.

Maddie, whose formal name is Bran Linn Amulet, is a grand champion bronze – referring to the number of Gordon Setters she’s defeated in her career. Her specific name is Amulet and her kennel name is Bran Linn.

Maounis says that a dog show is not just about the breed’s beauty. The aim is to bring together dogs that best conforms to the performance and physical standard for the breed. The objective is to judge the best of the breed and to maintain the breed for centuries.

Gordon Setters are great with children and so they may be very protective of children in the family. The dog may be very active when they are young but tend to become gentler as they grow older.

For most Canadian pet insurers, the pet owner has to wait for some days – after the pet is diagnosed with an illness or involved in an accident – to process the claim. The waiting period could vary from one insurer to the other but it is usually 14 days for illnesses and 48 hours for accidents.

What medical conditions are common with Gordon Setters?