These are gentle, athletic, and loving dogs. They do well with children and other dogs, making them perfect companions.
Compare. Get the best policy. Save money!
Get a Quote Now 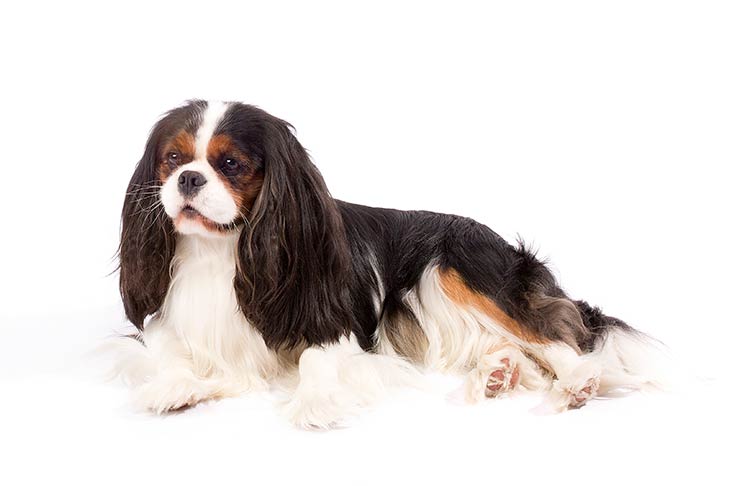 The Cavalier King Charles Spaniel is a graceful, affectionate and gentle dog breed. It is one of the largest toy breeds, combining the athleticism and vigor of a sporting spaniel to gentle attentiveness of the toy breed. This makes it the best of the two worlds. The even temper, grace, and beauty of Cavalier make it a dogdom’s nobleman.

Even though Cavaliers are aristocratic breeds, they adapt well with other dogs and children. The Cavalier we know today is a relatively new breed recreated less than 100 years ago, however, it is the descendant of the toy spaniel that served as a companion to nobility and royalty for centuries. Famous artists such as Gainsborough and Van Dyck described Cavaliers’ ancestors in their paintings in the 16th, 17th, and 18th centuries.

The breed was a popular choice among royal and noblemen in England. Queen Mary of Scotland and her grandson, Charles I, and great-grandson, Charles II, were always accompanied by Cavaliers. As royal and noble as they are Cavaliers may be prone to certain health. If you are planning to get a Cavalier, you should equally plan to get a Cavalier King Charles Spaniels pet insurance alongside.

With the right Cavalier King Charles Spaniel pet insurance, you will be able to provide your pet with the best veterinary care it deserves to make sure that it serves your purpose and lives longer. You should make sure you take out pet insurance as early as possible to avoid pre-existing medical conditions from limit the coverage you will get.

To get a quote for Cavalier King Charles Spaniels pet insurance, click here.

The Cavalier is a very sensitive and friendly breed. Canines in this breed are playful but they require moderate and low-intensity exercise. They are also a fairly easy to train but intelligent breed.

Just like other pets, Cavaliers may be prone to certain diseases. Mitral valve disease is very common with this breed; this disease is a common cause of heart failure among Cavaliers and it is the most common cause of death in the breed. They may also develop hip dysplasia, retinal dysplasia, cataracts, luxating patella, to mention a few.

Most of these health problems require thousands of dollars in veterinary treatment. Hip dysplasia requires more than $5,000 and some other conditions may even require more than this amount. With the increasing veterinary cost, it is likely that the cost of these treatments may rise as the day goes by. This is why you should get Cavalier King Charles Spaniels pet insurance.

You will be able to protect your lovely pet the way you want with the right Cavalier King Charles Spaniels pet insurance.

In an incident captured on a video taken at an off-campus fraternity house in Hempstead N.Y and shared on social media, a group of people forced a Cavalier King Charles Spaniel dog to drink beer. As should be expected, the Nassau County Society for the Prevention of Cruelty to Animals and also the Hofstra University administrators frowned at the incident.

The five-second clip shows that the incident involved some members of a fraternity. Pending the result of the investigation, the Long Island university confirmed on May 13 that it suspended its chapter of Alpha Epsilon Pi.

As of May 14, over the clip has been viewed over 100,000 times on Twitter. It also caught the attention of the Nassau County SPCA, and as a result, the organization began its own investigation.

Gary Rogers, a spokesman for the Nassau County SPCA said that it was wrong on so many levels. “I’m sure it wasn’t the dog’s idea, ‘Hey, I want some beer.’ Animals don’t make that choice.”

The dog, which was living in a house associated with the fraternity, has been placed under SPCA’s care. The puppy, between 5 to 10 months old, belongs to a Hofstra, 21-years-old, one of the people in the video.

Roger said that their major concern is the dog’s safety. “The dog is no longer in that environment”, he added. He also said that the dog appeared to be in good condition when investigators visited the house.

How long can a Cavalier King Charles Spaniel be left alone?

Cavaliers are not aggressive dogs. It is always important to socialize the dog early enough to avoid problems. They respond well to training and love to please their owners.

What medical conditions are common with Cavalier King Charles Spaniels?