Bulldogs are docile, loyal, and dignified companions. They are notorious lap dogs who love a good cuddle.
Compare. Get the best policy. Save money!
Get a Quote Now 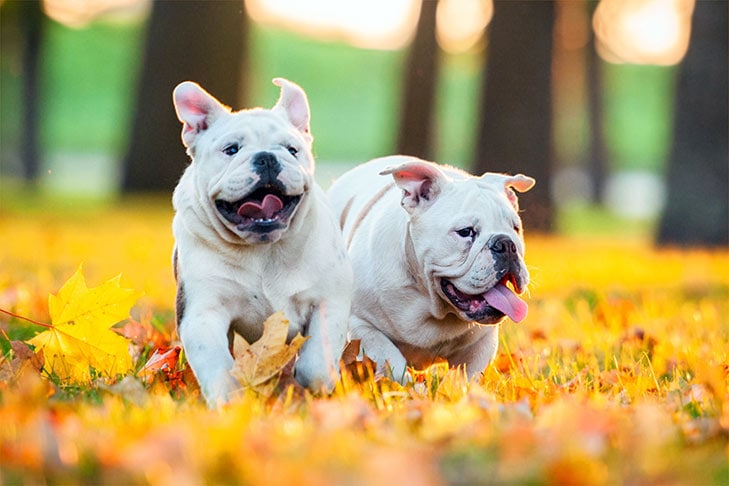 Bulldog needs no introduction. The dog breed is also known as English Bulldog or British Bulldog. Bulldogs have a pushed-in nose, distinctive rolling gait, small ears, and furrowed brows. It has a small stature but weighs up to 50 pounds. Bulldogs are wonderful companions and lovely friends. To make sure that the dog looks its best, it is recommended that you give it an all-over brushing for 10 minutes, two to three times a week, with a soft brush.

The present-day Bulldog is a bit different from its ancestors especially in strength, but this is not to say that Bulldogs are no longer strong. The breed of dogs was created during the reign of King John in the 13th century England basically for bullbaiting. Bullbaiting was a popular activity in which a stalked bull fought a pack of dogs while the spectators bet for the outcome.

However, the Cruelty to Animals Act of 1835 made bullbaiting as well as other activities such as bear-baiting and cockfighting illegal. The old British Bulldog outlived its usefulness because of this, however, immigrants carried their Bulldogs abroad. Bulldogs have many important characteristics but just like other dog breeds they may be affected by conditions like entropion, dry eye, cherry eye, head shakes, to mention a few.

To take adequate care of your furry friend, you need to get the right Bulldog pet insurance. With the right insurance, you will be able to provide your dog with the routine and state-of-the-art care it requires. This will not just ensure that the dog lives to a full old age but it will be happy always. Before taking out Bulldog pet insurance, make sure you research the pet insurer and the policy to be sure you understand everything about it including the waiting period, stipulations, limits, and exclusions.

To get a quote for Bulldog pet insurance, click here.

Why Bulldog Pet Insurance Is Important

Unlike some other dog breeds like German Shepherd, Labrador retrievers, and even French Bulldog, Bulldogs have a relatively short lifespan. In most cases, they begin to show a sign of aging at the age of 6 despite taking up to two and a half year to mature.

Furthermore, a 2004 UK survey involving 180 Bulldogs shows that the leading cause of Bulldog deaths includes cardiac issues (20%), cancer (18%) and old age (9%), the study put the median age of Bulldog death at 6 years and 3 months. Another UK survey carried out in 2013 puts the median lifespan at 8.4 years with an interquartile range of 3.2 to 11.3 years.

The Orthopedic Foundation for Animals tested 467 Bulldogs for 30 years between 1979 and 2009 and revealed that 73.9% of the dogs had hip dysplasia. This indicates that hip dysplasia is very common among Bulldogs. Veterinary treatment for this condition can cost up to $5,000, you definitely do not want to shell out such an amount of money out of pocket, do you? This is why you need to take out Bulldog pet insurance as quickly as possible.

Greg Longo wanted to be a responsible pet owner and so he bought pet insurance coverage for his purebred English bulldog Winston. He paid $65 per month in insurance premium until he switched insurance companies. With his current insurance company, 24PetWatch, he pays $35 a month.

Not quite long, Winston had a health scare. The dog had an abscess, a puss build up in an area of the body tissue. The puss pushed up against Winston's brain and so it required emergency surgery. Due to the possible damage that could be caused by the ear canal, it had to be removed and the procedure cost $7,600.

But when Longo made a claim to 24PetWatch, his claim was denied. The insurer told him that the cost of the surgery will not be covered because of the previous infection in the dog’s other ear. Longo was shocked by the claim denied and had to resubmit it, stating that he wanted nothing more than what he paid for the surgery.

Mike Wallace, the President of Insurance at Pethealth Inc. (a parent company of 24PetWatch) told CTV news that the company does not comment on claims, especially the ones that are still in progress. He added that they make decisions based on the documents and records submitted to them.

How long can a Bulldog be left alone?

Bulldogs should never be left alone for up to 10 to 12 hours and they should live inside the house.

Are Bulldogs protective of their owners?

Bulldogs have a stout body and formidable features but they are very protective and gentle. They are never aggressive or vicious and are always good with children.

What medical conditions are common with Bulldogs?