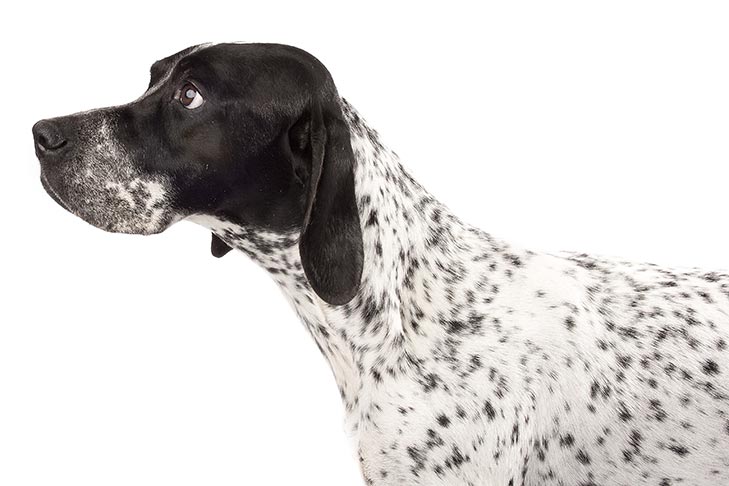 For centuries, Pointers are known to point game birds. They are very energetic dogs, full of grace and canine power. Canines in this breed are known for their agility and great speed. They are the aristocrats of the dogdom. These are large dogs; the males stand up to 28 inches tall at the shoulder while the female stands up to 26 inches at the shoulder. Pointers can live longer than most dogs of the same size – they can live up to 17 years.

Pointers are king in show rings, especially in sports that involve obedience and agility. However, they are fun loving and make good family companions. The breed is believed to have originated from Spain but their history is not clear. However, the modern-day Pointer was developed in England by crossing several breeds including Greyhound, Bloodhound, Foxhound, and a lot of setters.

When taking out pet insurance coverage for your Pointer, it is important to understand what the policy covers and what it does not cover. Understudying the policy will save you a lot of stress in the long-run. Pet insurance providers will deny your claim if you fail to adhere to meet up with any statement in the pet insurance policy.

To get a quote for Pointers pet insurance, click here.

Why Pointers Pet Insurance Is Important

To a reasonable extent, Pointers are genetically sound dogs. However, they may suffer from some health problems including hip dysplasia and epilepsy.

Musculoskeletal issues like hip dysplasia are very common with large dogs. A medical condition like hip dysplasia could cost up to $5,000 and even more in veterinary treatment. Most pet owners wouldn’t want to pay veterinary bills out of pocket, especially in an emergency, that’s why you should take out Pointers pet insurance.

The right pet insurance will cover the cost of illnesses, diagnostic tests, emergency care, accidents, prescription, and so on.

Rio, a 10-months-old Pointer cross, went missing in January 2018 near Cambridge, UK. Although he was sighted a few times initially, he was not spotted again until March this year and finally caught in May.

The dog is believed to have lived off rabbits at a former landfill site. Being found, he has been returned to a rescue center and is hoping for a new home.

Animal charity Canine Capture UK took the lead in searching for the dog. They even posted Rio’s photos on a dedicated Facebook page.

Since Rio had been living in a wild state for over a year and was close to two busy roads, people are warned to stay off him.

Kerry Linsey saw the dog running about, in some cases with a rabbit in his mouth, so she set up a food station close by to befriend the dog. In no time Rio became used to her and started waiting for her and the food she brings.

Eventually, a trap was set with the food and, monitored by a camera, Rio was caught.

It is possible that the dog had been living in the same area all the while, fending for himself and living off rabbits, Linsey said.

Rio’s former owner has already adopted another dog and so Rio was taken to a rescue center in Surrey, UK

According to Linsey, the Pointer cross has been checked by a vet, he is also settling well. He now remembers how to play with a ball and enjoys his first bath.

Are Pointers prone to separation anxiety?

Are Pointers protective of their owners?

Pointers are protective of their terrier, family, and owner. They also do well with children.

In the event that your dog is diagnosed with a health issue, you will be expected to wait for some days before processing your claim. The waiting period usually lasts for 14 days for illness, however, they may differ from one pet insurance company to the other.

Generally, pet insurance companies do not cover pre-existing conditions. In the event that your dog is diagnosed with a medical condition, the condition will be excluded from the Pointers pet insurance. You can access coverage for other conditions but not the diagnosed condition.

What medical conditions are common with Pointers?