Maltese are charming, playful, and adaptable dogs. They are affectionate toy dogs who love to make friends with people and pups alike.
Compare. Get the best policy. Save money!
Get a Quote Now 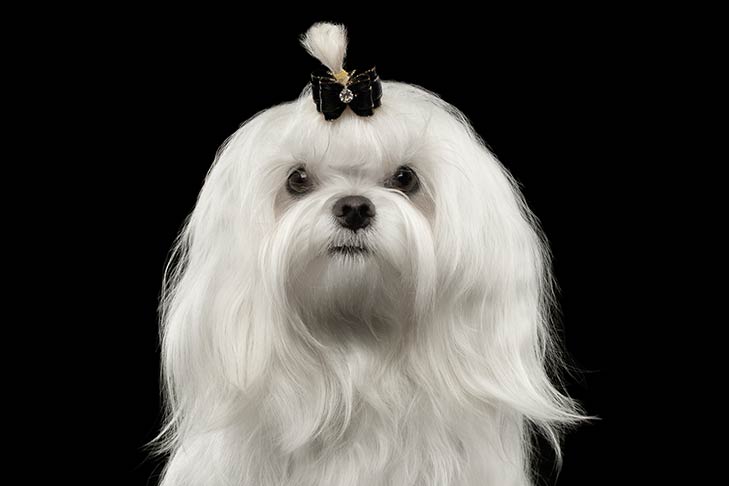 Malteses are small-sized dogs belonging to the toy group. Canines in this breed are fearless and gentle; they do well as a companion dog and also as a therapy dog. They compete well in dog sports that require obedience, rally, agility, and tracking. Maltese love to be with people, they are friendly with kids and other dogs and are also easy to train.

This is one of the most ancient of the toy dog breeds; its history can be traced back to more than 2,000 years. Maltese dogs were mentioned by Aristotle and ancient Greeks erected tombs for the Maltese dogs. The breed was also widespread in Mediterranean cultures before the Christian Era. Canines in this breed were thought to possess the ability to cure people of diseases and they were usually placed on the pillow of an ill person by ancient Egyptians and Europeans.

Although Maltese possess some wonderful characteristics, canines in this breed can develop certain health problems as they grow old. Of course, Maltese are generally a healthy breed and it is possible that your dog will not develop any chronic health problem but you need to take out Maltese pet insurance in case the unexpected occurs.

To get a quote for Maltese pet insurance, click here.

Why Maltese Pet Insurance Is Important

The Maltese is commonly nicknamed the “Sleeve Dog”; they have been known by several names such as the “ancient dog of Malta”, the “Maltese Terrier”, the “Roman Ladies’ Dog” and so forth.

Unlike most large dogs, Maltese are not so prone to hip dysplasia. In fact, you should expect to see health clearance for hip and elbow dysplasia, von Willebrand’s disease, and hypothyroidism.

However, canines in this breed may be susceptible to several other health conditions such as patellar luxation, hypoglycemia, collapsed trachea, progressive retinal atrophy (PRA), portosystemic liver shunt, and so forth.

The tendency to Bark: High

After paying $1,800 for a nine-week-old puppy, Deszi,  from Langley, B.C. breeder, Meads and Grauer said that the dog died four days after they picked it up. Deszi was a Morkie, a cross between a Maltese and Yorkshire Terrier.

Meads said that the dog was so fluffy. “He almost fit in my hand”, he said. Now, the couple wants the B.C. breeder, Robert Henry, to provide them with another puppy or refund their money. According to a contract they signed with Henry, he will replace the dog if it had a congenital defect.

Henry argued that Deszi was healthy as at the time it was sold and he does not know why it died.

Dogs are sold by private contracts in B.C. If the owner is not satisfied or the dog dies, you can only get recourse through the courts. Pricey appliances and cars are usually pegged with a warranty to be purchased but not dogs, even expensive ones.

Even when there is a contract, the buyer still has to prove that it is defective. The couple said that they pay a lot of money in vet and breeder bills. “I am not really sure how much longer I can have this fight for before I just need to move on and forget about it”, Grauer said.

Since there is no registry, it is difficult estimating how many dog breeders operate in British Columbia. From veterinarians to lawyers, animal experts are saying regulations are needed.

Are Maltese prone to separation anxiety?

Any dog can suffer from separation anxiety when left alone for a long time but Maltese are less likely to suffer from such distresses.

Are Maltese dogs protective of their owners?

Yes, Maltese dogs are protective of their owners and of their personal spaces.

Most pet insurers in Canada will require you to wait for some period before your Maltese pet insurance will kick off. The number of days may vary from one pet insurer to the other but it is usually 14 days for most insurers.

What medical conditions are common with Maltese?