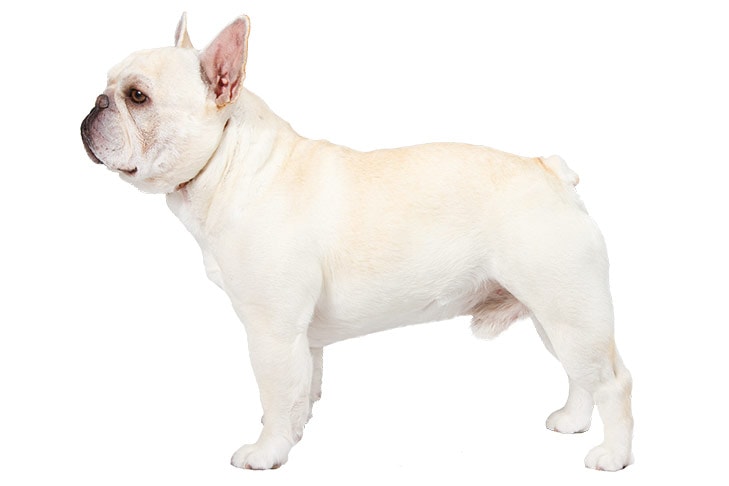 French bulldogs, also known as Frenchies, are a rare dog breed. It is a unique breed of dog that often serves as a close companion to its owner. The Bulldogs have a miniature size and short legs with bat-like ears. Aesthetically, bulldogs may not be so glamorous and showy like other dogs but they have attributes that put them on top of the list. If you are looking for a companion dog, you should definitely consider getting a Frenchie.

Frenchies originated from England and was very popular with lace workers in the city of Nottingham. When they migrated to France in search of better opportunities, the lace workers took alongside with them the bulldog. Since the 1800s, French bulldogs are bred for non-sporting reasons. Their miniature size is as a result of the crossing of some bulldogs with terriers.

Just like any other dog breed, Frenchies may be prone to several health problems, especially as they grow old. Common illnesses include hip dysplasia, brachycephalic syndrome, hemivertebrae, allergies, patellar luxation, to mention a few. To protect your bulldog furry friend against these conditions, you need to get the right French Bulldog pet insurance.

Unfortunately, if your Frenchie is diagnosed with any of these conditions before the start date of the pet insurance policy, such condition will be excluded from the coverage. This means that you will have to take care of it out of pocket. This is why you should get French Bulldog pet insurance policy as early as possible to be sure that your lovely pet is well and adequately covered.

To get a quote for French Bulldog pet insurance, click here.

French Bulldogs are a loving friend and companion. They are affectionate, sociable, alert, lively, patient, playful, bright, easygoing, athletic, and keen. You definitely don’t want money to be a deciding factor on how you take care of your bulldog. However, with the rising cost of veterinary care, you might not be able to give your bulldog the care it deserves without taking out a French Bulldog pet insurance policy.

Of course, veterinary care is far cheaper than human medicine but it can still put a strain on you if you decide to pay out of pocket. For instance, hip dysplasia can cost close to $5,000 and with the rising veterinary care, the cost is bound to increase. You don’t want to spend such amount of money and more out of pocket, do you? This is why you need to get the right coverage as quickly as possible.

Sports stars and socialites love French bulldogs. However, the Royal Veterinary College (RVC) warns that anyone considering buying a French bulldog should be ready to spend expensive vets bills because they are so unhealthy.

French Bulldogs have become so popular nowadays. Since 2003, the number of puppies born increased by a whopping 7500 percent. Every year, about 12,000 French bulldogs are now bred for the British market.

Kennel Club’s Assured Breeders Scheme Secretary, Caroline Kisko, said that there have been a remarkable increase in the breed’s popularity as well as irresponsible breeders who want to make a quick profit. The breeders are leveraging the trend by developing puppies without considering their temperament, welfare, and health.

The largest study ever conducted on the breed, involving 2,228 dogs, shows that the breed is susceptible to several health conditions including conjunctivitis, ear infections, and diarrhea.

Apart from the health risk associated with their extreme physical features, the unquenchable public demand for the puppies is fueling a profitable market amoral breeders and dealers.

Some puppies are bred in poor conditions, usually outside the U.K., and then passed as healthy puppies bred in the U.K. O’Neill said that can play a part in several behavioral problems such as aggression. O’Neill advised owners who decide to buy French bulldog puppies to research carefully about the origin of the puppy and only buy from a breed who is a member of the Kennel Club’s Assured Breeder Scheme.

French Bulldogs don’t like to be left alone for a long period of time. You should not get a French Bulldog if you work long hours because they might develop separation anxiety resulting in uncontrolled barking.

Are French Bulldog protective of their owners?

Frenchies may sometimes be protective but they are usually fine around strangers. They are happy to meet people and are sociable.

For most pet insurers in Canada, you need to wait for a specified period before the coverage will take effect. The waiting period may vary from one company to the other but most companies have a waiting period of 14 days.

Medical conditions diagnosed before the coverage's start date are usually excluded from the pet insurance policy. This means that the French Bulldog pet insurance will not cover such conditions.

What medical conditions are common with French Bulldog?