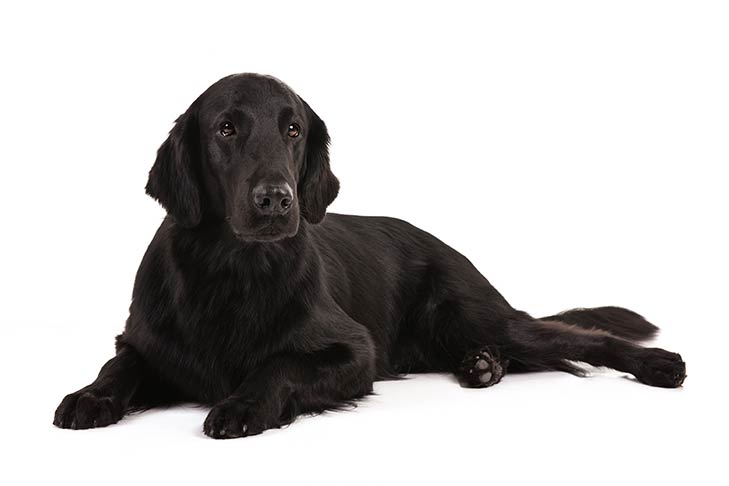 The Flat-Coated Retriever stands up to 25 inches at the shoulder and weighs no more than 70 pounds. It is one of the happiest of all dog breeds. This breed is often described as “The Peter Pan of the Sporting Group”. He is of relatively recent origin. Most owners say that their dogs don’t grow up; they retain their puppyish taste even till old age.

Commonly nicknamed Flatte or Flatt, the dogs are as tall as the famous Labrador Retrievers but they are more elegant and also leaner. It is believed that the breed was developed in the mid-1800s from a breed known as “Old Bounce”, hence their bouncy nature. So many people are credited to developing and advancing the breed; these include J. Hull, S.E. Shirley, and H.R. Cooke.

Flattes are wonderful dogs known to be extremely sociable, friendly to everyone and lovely towards children. They deserve every iota of care and love you give them. The best way to take care of your furry friend is by taking out the right Flat-Coated Retrievers pet insurance.

It is advisable for pet parents to take out pet insurance for their Flat-Coated Retrievers as soon as they purchase or adopt the dog. No one plans for critical illnesses; some conditions are so urgent that you will hardly have the time to prepare for them financially. The best way to deal with such issues is to prepare ahead of time for unforeseen circumstances and that’s best done with pet insurance.

To get a quote for Flat-Coated Retrievers pet insurance, click here.

Cancer is a very common condition with Flat-Coated Retrievers. They have one of the highest risk of cancer among dogs. Common cancers that occur in the breed include hemangiosarcoma, fibrosarcoma, osteosarcoma, and malignant histiocytosis. A 2010 health survey conducted with purebred Flat-Coated retrievers in the UK shows that 50% of the dogs will die of cancer.

Some other conditions common with Flat-Coated retrievers include bloat, patellar luxation, progressive retinal atrophy and so forth. Most of these conditions cost thousands of dollars in veterinary treatment - some conditions will cost up to $7,000 or even more.

You don’t want to spend such an amount of money out of pocket, do you? Why not take out Flat-Coated Retrievers pet insurance as soon as possible.

Lori Mihm-Kunz, owner of 2019 best in breed for the flat-coated retrievers, said that the Westminster Kennel Club Show is like the Super Bowl of dogs”. Mihm-Kunz said that the win is a product of decades of work.

I have owned flat-coated retrievers for 30 years. It’s six generations for me, she said. Each of the generations was a step towards raising the winner at the 2019 Westminster Kennel Club Dog Show.

The flat-coated retriever answers the name “Bosch”. Mihm-Kunz, a member of Tanana Valley Kennel Club said it would be the first time a dog from Fairbanks has been judged best in breed.

The flat-coated retriever is five years old but two of those years were dedicated to dog shows. He has won best in show at five dog shows and now he has added the Westminster best in breed title to his accolades.

Bosch’s littermate from the same breeder, named Austin, was the runner-up in the same category. Susan Parson, kennel club member and a friend to Mihm-Kuhz said it is a big deal in the dog world to make it to the Westminster show in the first place. “You have to be invited to the dog show”, she said.

Bosch was chosen for the show because he was named the best flat-coated retriever by Canine Chronicle. Bosch’s owner said her dog loves going to dog shows. The dog is on a special diet and a weekly washing routine to ensure that he’s well-groomed and in good health. When he returns home in Alaska, he joins his owner for long walks in winter and bike rides in summer.

Are Flat-Coated Retrievers protective of their owners?

Flat-coated retrievers are excellent companion dogs. They make good watchdogs and are protective of their family but they are not usually aggressive.

You will usually be required to wait around 14 days after an illness to process your claim. The waiting period is not the same for every pet insurance company and every company states their waiting period in the policy document. Also, the waiting period for accidents may be shorter than that of illnesses.

What medical conditions are common with Flat-Coated Retrievers?