These charming dogs are graceful and gentlemanly. They love to play and they get along well with other dogs and people.
Compare. Get the best policy. Save money!
Get a Quote Now 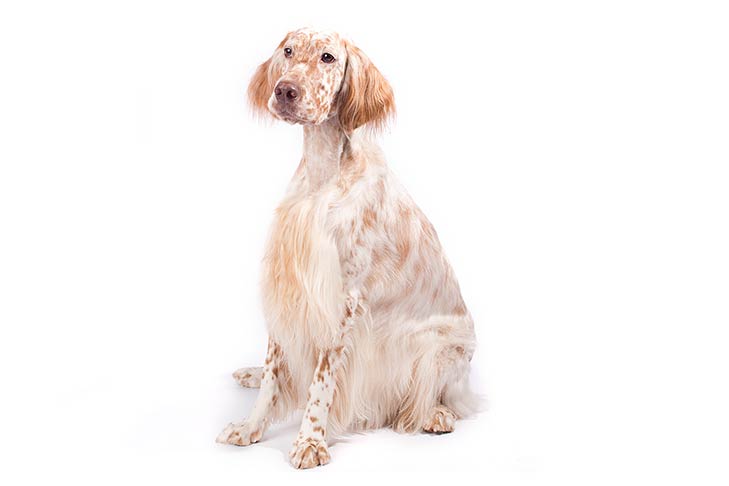 Standing no more than 27 inches at the shoulder and weighing no more than 80 pounds, the English Setter is a medium-sized dog. He’s a sporting dog with good looks and good temper. AKC describes him as a “solid dog with beauty and charm”. The breed is so named because it sets or crouches low when it found birds, allowing hunters to capture them.

Today, English Setters still have these unique qualities and attributes that distinguish them and they are excellent family companions.  Most pet owners want the best for their dog. Of course, you should provide the best dog food, exercise and care to your furry friend but most importantly, you need to take out English Setters pet insurance.

To get a quote for English Setters pet insurance, click here.

Just like any other dog breed, English Setters are susceptible to certain health problems. A 2010 survey conducted by the Louisiana State University involving 701 English Setters reported that congenital deafness affects 12.4 percent of the dogs. Some other conditions that affect English Setters include hip dysplasia, hypothyroidism, and so forth.

You don’t have to spend such an amount of money out of pocket, you can take out English Setters pet insurance as soon as possible to get the assistance you need in paying pet-related medical expenses.

A 14-year-old English Setter, Pete, and his owner Stephen Parisi met a black bear when hiking at Monksville Reservoir in New Jersey in February 2018.

As a result of the rain, the bear, which was sheltering, was unable to smell Stephen and so he became startled.

Speaking to BBC, Stephen’s wife Cathi Henn said that the bear had only a 180-degree turn to exit. The bear was not ready to turn its back on anything it was scared of and so it came for Stephen and the other dogs.

Pete got severely injured during the process. Since Stephen could not carry the dog, he wrapped him up in a waterproof jacket and pulled him along the ground to his car. The injury could have left the dog unable to walk and so the owners, Stephen and Cathi, determined to put him down.

Cathi said they are upset about their dog. “We are devastated”, she said, “all this love for Pete is great but we would happily trade it for one more day with him”.

Are English Setters protective of their owners?

Most English Setters do not have a protective instinct. They are too gentle to be protective but they are alert.

Most pet insurers will not provide coverage to your pet for any condition it is diagnosed with before the policy’s start date. Such condition, known as pre-existing conditions are usually excluded from the English Setters pet insurance coverage.

What medical conditions are common with English Setters?