These dogs are loving, playful, and devoted to their owners. They are incredibly affectionate and in tune with their families.
Compare. Get the best policy. Save money!
Get a Quote Now 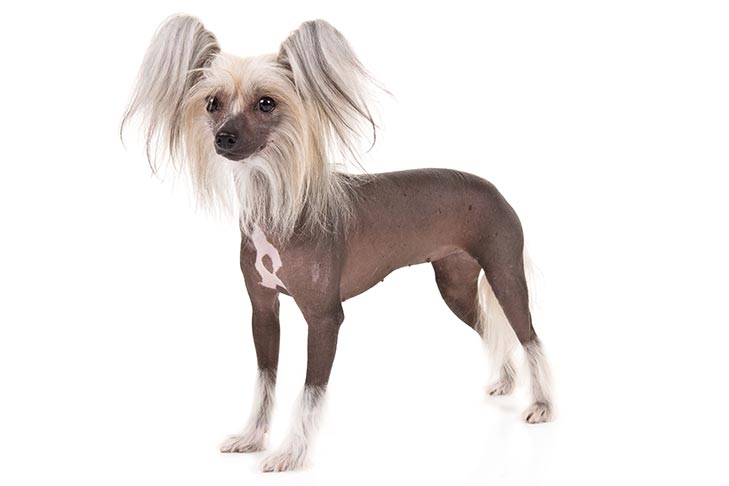 The Chinese Crested cannot be mistaken for any other breed. Their spiky crested hairdo, spotted pink skin, feathery tail, and furry socks make them completely different from any other dog. They are frolicsome but not gregarious. Once they bond with you, you can be sure of their eternal devotion and loyalty. The dog was created to be an invalid’s companion and there is no better dog for this task.

This breed is commonly known as “Puff” or “Crested”. The dog did not really originate from China. They probably come from Africa or Mexico and evolved from hairless dogs but the Chinese were responsible for reducing their sizes. It is believed that the dog accompanied Chinese sailors around 1530 on high seas.

This breed occurs in two variety: the hairless and the coated. The coated variety has a silky and soft coat and is also known as “powderpuff”, while the hairless variety has soft smooth skin and collection of hairs on their ankles, head, and nail.

Like any other dog, the most effective way to take care of the Crested is by taking out the right Chinese Crested pet insurance. Pet insurance will assist you in covering pet-related medical expenses related to injuries, accidents, illnesses, hospitalization, emergency care, diagnostic tests, and so forth.

To get a quote for Chinese Crested pet insurance, click here.

Unlike most toy breeds, Crested is not affected by a lot of congenital diseases, however, they are prone to certain health problems. While some Puffs may not develop any of the conditions in their lifetime, it is important for pet owners to be aware of them and take necessary precautions before it occurs.

The health conditions common to Puffs range from dental issues and progressive retinal atrophy to keratoconjunctivitis sicca and Legg-Calves-Perthes diseases. The best you can do is to take out Chinese Crested pet insurance to assist you in paying the cost of the veterinary treatment in the event that any of the conditions occur.

The police rescued a 17-year-old Chinese Crested dog, Hoss, who they found in a dirty bathroom with no food in a  Penticton home. The SPCA’s South Okanagan-Similkameen branch said that the police went for another purpose when they found the dog. The dog was re-homed and was slated to have oral surgery in early 2019.

Carolyn Hawkins, manager of the SPCA South Okanagan-Similkameen branch, said that it is important that the dog goes through the surgery. He had been found by Mounties in a dirty, tiny bathroom covered with feces and urine and with no water or food.

“When he first arrived, he struggled to eat, and the mouth issues certainly played a role”, Hawkins said.

After being rehomed to a long-time branch volunteer and supporter, Hoss, who was just four kilograms at the time he was seized, is now five kilograms.

Hawkins said they were thrilled that the sweet dog will have a place of his own during the holidays. He still loves being in people’s laps and wagging his tails even with all he has been through.

More than $2,000 was donated for Hoss’ surgery. “Hoss’s story has a happy ending”, Hawkins said, “We want to be able to give other animals that same chance. They too deserve the same happiness”.

Chinese Cresteds tend to form a strong bond with their owners and hate being left alone. So, they may develop serious separation anxiety when left alone for long.

Are Chinese Crested hard to housebreak?

It is difficult to housebreak canines that belong to the Chinese Crested breed. They require consistent crate training.

What medical conditions are common with Chinese Crested?