Affenpinschers are famously comedic dogs with curious and loyal personalities. These furry friends provide lots of love and entertainment.
Compare. Get the best policy. Save money!
Get a Quote Now 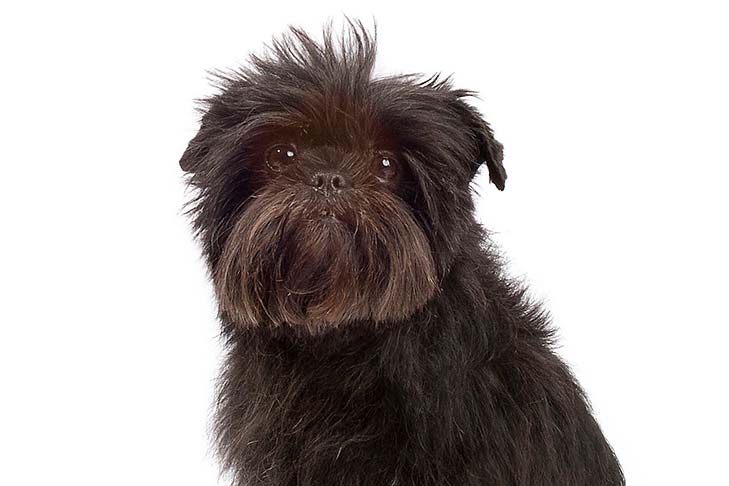 The Affenpinscher is described by the AKC as an “almost-human toy dog”. They go by several nicknames such as “Monkey Dog”, “Affie”, and “Affen”. You don’t train an Affie, rather you befriend him. These sturdy dogs approach life with great confidence. They are affectionate, loyal and entertaining but they can also be domineering and willful.

This breed originated from Germany. Their ancestors are believed to be rough-coated, small and bearded dogs depicted in paintings by Dutch artists in the 15th century. The Affenpinscher was bred to work like a terrier, even though he’s not one. In the 1600s, he was used to exterminate rats and other pests in Germany. Later Germany breeds such as the Miniature Schnauzer and the Brussels Griffon were influenced by the Affen.

You don’t own an Affenpinscher; the reverse is rather the case. In fact, Affen people say they love to be owned by their little friend. The best way to take care of your furry friend is by taking out Affenpinschers pet insurance as soon as you purchase or adopt your dog. With the right pet insurance, you will cover your pet’s medical expenses and even routine procedures such as vaccination and checkups.

To get a quote for Affenpinschers pet insurance, click here.

Why Affenpinschers Pet Insurance Is Important

While veterinary care is cheaper than human medicine, you may still have to pay up to $3,000 or even more to treat most pet-related medical expenses, some conditions may even cost much more. Rather than spending such an amount of money out of pocket, you could take out Affenpinschers pet insurance as soon as possible.

When you take out Affenpinschers pet insurance, in addition to paying the monthly premiums, you may still have to pay co-insurance which could be 10% of the expenses. The insurer usually takes care of 90% of the expenses.

Even with the cost of insurance, pet insurance will still save you a great deal of strain when the unexpected occurs. Most pet owners say that pet insurance is a lifesaver and some could have lost their pets to accidents or illness if they did not have suitable coverage.

After Banana Joe took home the top award at the Westminster Dog Show, Nancy Baybutt, the Affenpinscher Breeder Referral Chair, said she received up to 25 emails within 24 hours from people asking her how they can purchase an Affen just like Banana Joe.

The American Kennel Club recognized the Affenpinscher in 1936 and the breed became unpopular after the two the Second World War. Baybutt said the reason was that people don’t want German dogs.

But since Banana Joe’s win, the breed’s popularity has surged, however, it is difficult for people to find one. As of 2013, there were only 12 reputable Affenpinscher breeders, said the Affenpinscher Club of America.

Affenpinscher has small litters and whelping issues. A lot of female dogs belonging to the breed require a caesarian section to deliver. Once born, the dog will be in a fragile state during his first two weeks of life and weighs about 3 to 4 ounces.

Baybutt said that people who want an Affen should expect to wait a while. While you may find the breed cheaper online, the cheaper dogs are not usually from reputable breeders and the dog may be much larger and less healthy.

Are Affenpinschers prone to separation anxiety?

Like any other dog, an Affenpinscher may suffer from distress due to separation anxiety when left alone for long. This could result in undesirable behaviors.

Are Affenpinschers protective and aggressive?

Affenpinschers are gentle and loyal dogs. However, they are aggressive and protective; these attributes make them good watchdogs.

In the event of an accident or illness, you will be required to wait for some days before making an Affenpinscher pet insurance claim. The length of the waiting period is usually 14 days for illness and 48 hours for accident but it usually varies from one pet insurance company to the other.

What medical conditions are common with Affenpinschers?